At the end of June, Andy and I went to a party to welcome this little guy to the world. 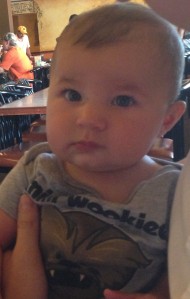 His name is Link, and he was a lot smaller in June. (He already is 4½ months old).  After some brainstorming, I decided that I’d attempt to make a gift for him, so I began scouring the Interwebs for simple, baby-friendly DIY gift tutorials.  I actually found a LOT of cute ideas, so it was a little tough to narrow it down.  In the end I opted for 2 items: a soft football and a ribbon/tag blanket.

The football actually presented a huge moral dilemma for me.  Do I choose colors based on the teams his (misguided) parents root for (Chicago Bears and Minnesota Vikings), or do I try to give him a chance in life and represent all things good (and Wisconsin-y)?  In the end, I decided that I could alter the pattern a little and incorporate a little bit of everything: blue and orange for Da Bears, purple and yellow for the ViQueens, green and gold for the almighty Green Bay Packers, and red and white (and black) for the ferocious Wisconsin Badgers.

In order to incorporate all 8 colors, I had to modify the pattern a little.  All I did was trace half of the football pattern and add an extra ¼”-½” along the straight edge for seam allowance. 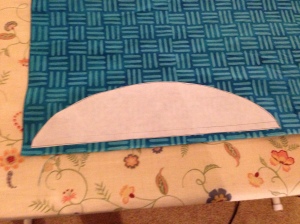 I actually learned that using freezer paper for your pattern is SUPER handy.  I can confidently say that it does stick to the fabric when ironed, and the same pattern piece worked for all 8 pieces I had to cut out.  I will definitely be using this method again—and again and again and again…

Unfortunately, I forgot to take any progress photos after this point since I was in “the zone.”  After cutting out all the pieces I just sewed the halves of each side together, sewed the ribbons on to one side for the laces, sewed the 4 sides together, realized I forgot to leave an opening along one of the seams to turn it inside out, ripped some stitches out, managed to get it turned inside out, and then proceeded to stuff it.  I wanted to keep it fairly squishy, so I didn’t stuff it as much as I could have, but I made sure it was stuffed enough to fill out.  Then all I had to do was hand sew it closed using a ladder stitch.  I have had to do a ladder stitch a couple of times recently, and even though I learned how to do it in Family and Consumer Economics in middle school (and it was actually the one part of our sewing project that I did well), I can never remember exactly how to go about it when I need to.  Luckily, Google and YouTube have yet to let me down, and I keep finding my way back to this video.

And there you have it!  Your very own, non-regulation football.  Andy and I may have tested it out a little to make sure it was tossable and catchable.  We both managed to catch it, so I’m pretty sure Link won’t have any issues.

As for the ribbon/tag blanket, I managed to take ZERO progress photos, but it was a pretty basic process.  I cut out 2 squares of fabric (I chose some green fleece for one side because who doesn’t like soft things?), cut several strips of ribbon to go around the edges, pinned it all together, sewed around the edges, REMEMBERED to leave an opening to turn it right-side-out, flipped it, and sewed around the whole thing to close it up again.  I thought about adding something inside to make it crinkly, but I couldn’t think of anything that I had on hand that would survive the moisture of a washing machine and the heat of a dryer, so I opted to keep it simple and machine washable.

I didn’t actually have to purchase any new fabric for the project thanks to scraps from a previous project and a fabric liquidation sale I hit up last winter.  (I KNEW I had a reason to buy it all. I just didn’t have all the details figured out at the time.)  I did stop at Jo-Ann Fabric and Crafts to pick up a few new kinds of ribbon and some stuffing, but it was kind of nice to find almost everything I needed in my own private fabric collection.

I hope Link enjoys them at least as much as I enjoyed making them.  These were such straight-forward, simple projects that I’m definitely planning on making gifts for the next baby shower I go to, whenever that might be.

One thought on “Goodies for Link”